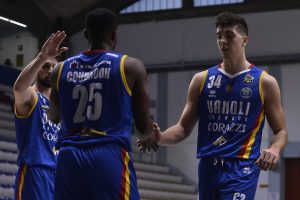 In occasion of the Serie A Basketball game, held on Tuesday 19th  January ’21, between Vanoli Cremona and Armani Milano, the Vanoli players wore the special commemorative uniform, with the Corazzi colours and logo, designed and produced in ‘Unique Edition ‘, to seal the 70th anniversary of the foundation of our Company

The support of Corazzi Fibre to Vanoli Basket Cremona, in this 2020-2021 season, was important, as well as the recognition by the President Aldo Vanoli and the whole basketball Company, sealed with the delivery of a personalized game tank-top to Antonella and Alberto Corazzi. 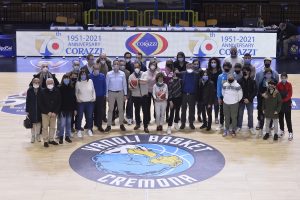 The blazoned Olimpia Milano team, one of the strongest in the Italian and European championship, won at the end of an exciting and hard-fought match, decided only a few seconds from the end, anyway with a great performance of the Vanoli Cremona team.