Paolo Corazzi, founder of the company and Grand Officer of the Order of Merit of the Italian Republic, took part at the war in Etiopia as official fighter. He was imprisoned for seven long years and was subsequently decorated with two brass medals and a war cross for bravery. He wrote a book titled “Etiopia 1938-1946 – Guerilla and barbed wire” published by Mursia with a preface by Piero Chiara, left as evidence of his life and his great love for Africa. He was a man of culture and an art lover, with a volcanic and generous personality, he held several positions as president in many scholarly circles, among which the “Rotary International” in Cremona and the “Benedetto Croce”.

As sensitive, experienced and educated man, he took part to many cultural initiatives. Through generous donations he contributed to the reconditioning of the absyde of the Cathedral in Cremona, opening the door to private interventions for the refurbishment of one of the most important buildings of the romanic style in Italy. Furthermore, to honor his wife’s memory, he entirely financed the restoration of the fresco “Christ in Majesty with the Patron Saints of Cremona” painted by Boccaccio Boccaccino in 1507, during the Renaissance Age. The works, started in 1989, have recovered its original compositive and chromatic qualities, returning the artwork to its former glory.

His continuous presence in the cultural field, carried out thoughout the years with dedication and commitment has led the municipal administration to devote him a street in the city, where the society, found by himself, is currently located.

During the years the company Corazzi Fibre intervened many times supporting the artistic and cultural heritage of the city. The Great Cross of the Cathedral, for instance, has been located in a bullet-proof shrine offered by Corazzi Fibre in memory of Paolo Corazzi, with the aim to preserve one of the most remarkable jewelry work of the XV century. Restored by the Opificio delle Pietre Dure (Workshop of semi-precious stones) in Florence and returned to Cremona in 1994, the Great Cross is a masterpiece in silver more than 3 meter high, weighing approximately 500 kg. Composed by more than 400

little statues of great artistic and compositive value, to which in 1775 a pedestal was added, represent nowadays one of the most appealing masterpiece of the medieval art.

In addition, since many years, Corazzi Fibre contributes to financing the wonderful Opera House “Amilcare Ponchielli” ranked as one of the most important national theatres.

Continuing the work started by Paolo Corazzi is the most tangible way to keep his memory alive.

In 1991, the “Paolo and Ilde Anita Corazzi Foundation” was established, its aim is the promotion of material, moral and spiritual support as well as the care, the rehabilitation and the re-integration of needy youngsters into the social and working life.

The assisted people are followed in several growth paths by integrating them in help groups. The youngsters are financially supported with scholarships and work bursaries in order to grant them all study access and employability. Furthermore, where needed, temporary housing solutions or emergency receptions are provided.

The school support actvities carried out by the Foundation are addressed to youngsters attending both lower and upper secondary school as well as university. The results have to be considered as gratifying: throughout the years 25 youngsters have achieved a degree and 9 a graduation.
The path of the work bursary, counting up to now (*) with 160 entering the job world, is composed by many professional profiles such as: 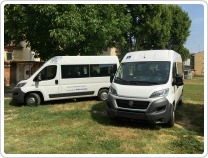 Corazzi Foundation is flanked by the NPO volunteering association Cadash Viscontea. The operators of this association play an essential role in the whole educational process of the assisted youngsters organizing, among the other, also spare time activities and short holidays periods. The contributions of the municipality of Cremona, that provides locations and facilities for the activities and supplies professionals supporting the youngsters, represent a keystone in the achievement of the goals in charge. The Foundation, along with Cadash, has delivered up to now (*) more than 2 millions Euro of contributions, confirming to be an active part in the solidarity world on the territory of Cremona.

Free donations to support Corazzi Foundation may be sent through the following bank accounts:

Since long time Corazzi Fibre carries out support activities for the community and the long-lasting cooperation with the NPO social cooperative “Il Legaccio” is a further proof of it. The cooperative has been established as an aid for the working integration inside a plan of the resocialization and rehabilitation of needy persons. It deals most with subcontract workings, steadily nurtured by Corazzi, from whom they receive mainly tasks concerning the assembling and packing of their products.

This website uses cookies to improve your experience while you navigate through the website. Out of these, the cookies that are categorized as necessary are stored on your browser as they are essential for the working of basic functionalities of the website. We also use third-party cookies that help us analyze and understand how you use this website. These cookies will be stored in your browser only with your consent. You also have the option to opt-out of these cookies. But opting out of some of these cookies may affect your browsing experience.
Necessary Always Enabled

Any cookies that may not be particularly necessary for the website to function and is used specifically to collect user personal data via analytics, ads, other embedded contents are termed as non-necessary cookies. It is mandatory to procure user consent prior to running these cookies on your website.